Greek locals have set up roadblocks to stop a new migrant camp being built on the island of Lesbos after the country’s largest shelter burned down on Tuesday.

Trucks were blocking access to the smouldering ruins of the Moria camp on Thursday to prevent a clean-up operation that would make way for new tents.

‘Now is the time to shut down Moria for good,’ said Vangelis Violatzis, a local municipal leader. ‘We don’t want another camp, and we will oppose any construction work. We’ve faced this situation for five years, it’s time for others to bear this burden.’

More than 12,000 asylum seekers spent a third night in the open last night after desperate families were left homeless and hungry by the fire, with France, Germany and the Netherlands offering to take in hundreds of them.

Greece’s government says the fire was started deliberately by asylum seekers protesting against quarantine measures at the camp.

Blockade: Lesbos residents park trucks head-to-head to barricade a road and stop the Moria migrant camp being cleaned up and replaced 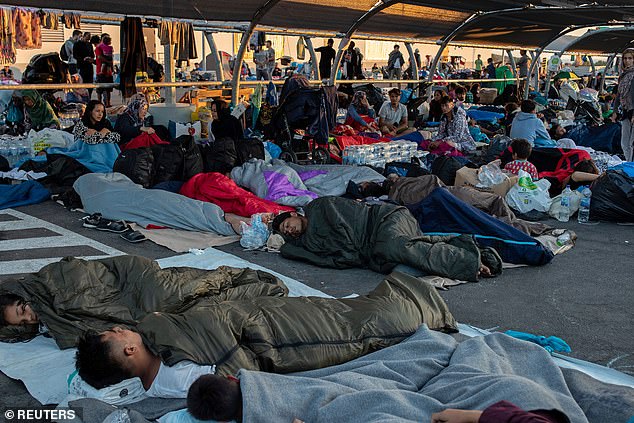 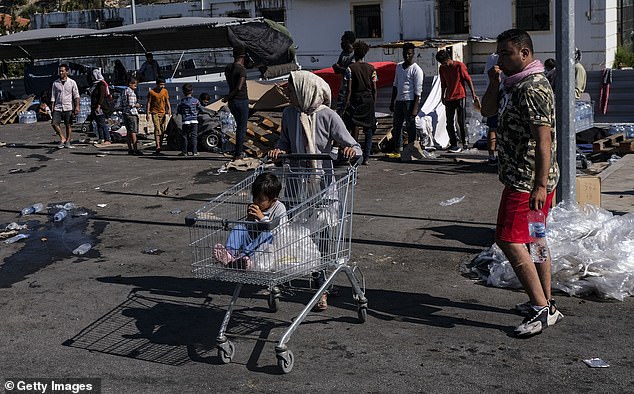 ‘We’ve lost everything, we were abandoned, without food, water or medicine,’ said Fatma Al-Hani, a Syrian woman who barely had time to grab her identity papers before the flames engulfed the camp.

Gaelle Koukanee, a pregnant 21-year-old Congolese refugee, said the police had fired tear gas during the operation to extinguish the fire.

‘We have children, old people, disabled among us. Why this lack of humanity?’ she asked, seeking shelter from the beating sun under an olive tree.

While nobody was seriously hurt, the Tuesday blaze destroyed the official part of the camp, which housed 4,000 people, ministers said.

A second fire broke out late on Wednesday, destroying most of the remaining camp where another 8,000 lived in tents and makeshift shacks around the perimeter.

Another fire briefly broke out inside the camp Thursday.

The minors in the Moria camp have been flown off Lesbos island and rehoused in ‘safe’ facilities in northern Greece, Athens said, adding that all had been tested for the coronavirus.

Migration minister Notis Mitarachi said that asylum seekers had started the fire because of quarantine measures imposed after 35 people at the camp tested positive for coronavirus.

Some who fled the fires on Tuesday and Wednesday night later tested positive for Covid-19, complicating attempts to round up migrants and get them into alternative accommodation. 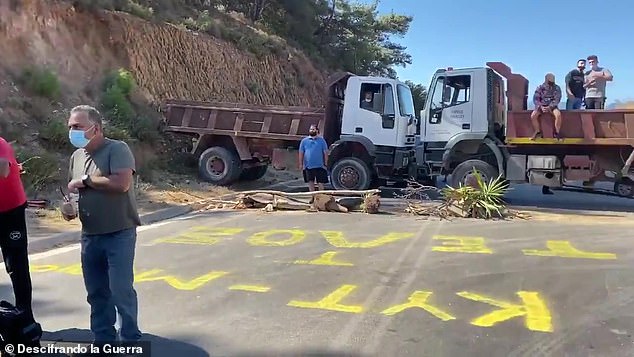 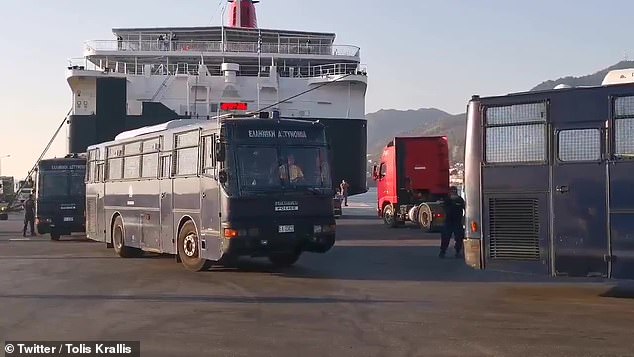 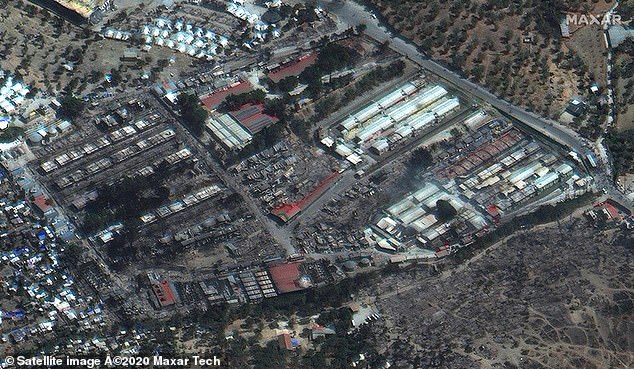 An aerial view on Thursday shows the aftermath of the fire which broke out on Tuesday night, leaving around 12,000 people homeless 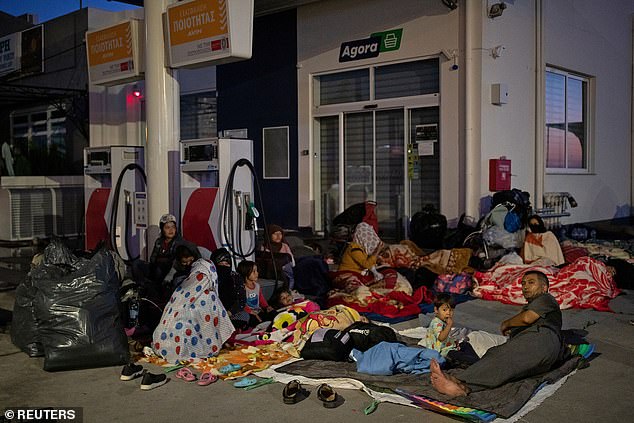 Asylum seekers find shelter outside a petrol station on Lesbos, with talks underway in Europe on how to re-settle the migrants

Earlier this year, a plan to build a new camp on Lesbos stalled after locals clashed with riot police to prevent the construction.

‘We lacked toilets, showers and as women, we were afraid to walk at night. But now I’m even more worried about my future,’ Koukanee, the Congolese refugee, said.

Greek officials have declared a four-month emergency on the island and flew in extra riot police.

Germany and France on Thursday agreed on an initiative for EU states to share out some 400 minors from the camp, a source close to the talks told AFP.

‘As a preliminary step we are offering to Greece to accept refugees who are minors – other steps must follow,’ German Chancellor Angela Merkel told a panel discussion in Berlin.

‘Europe must move from words of solidarity to a policy of acts of solidarity,’ he said at a summit of Mediterranean leaders in Corsica.

‘We have to put the migration crisis at the heart of our discussions and be much more concrete,’ he said. 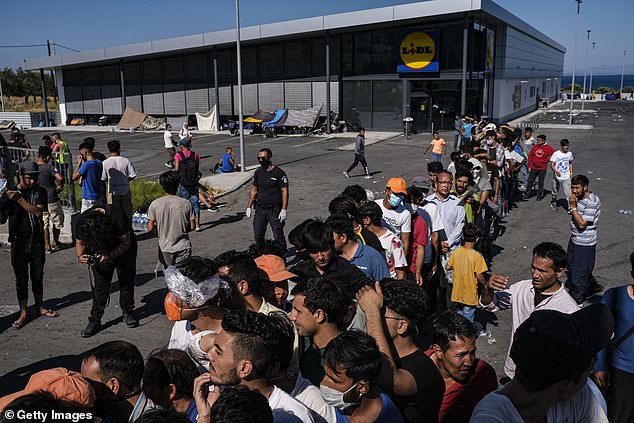 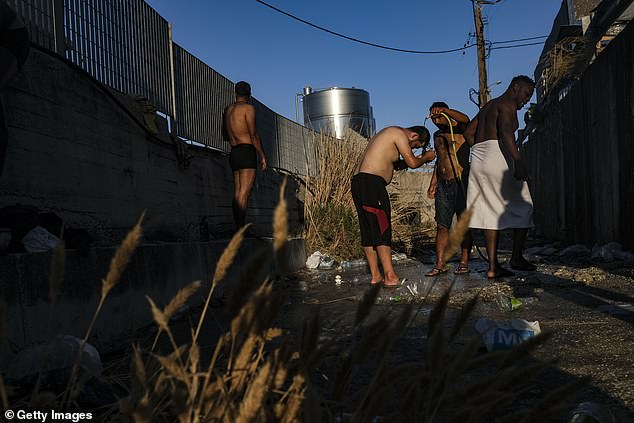 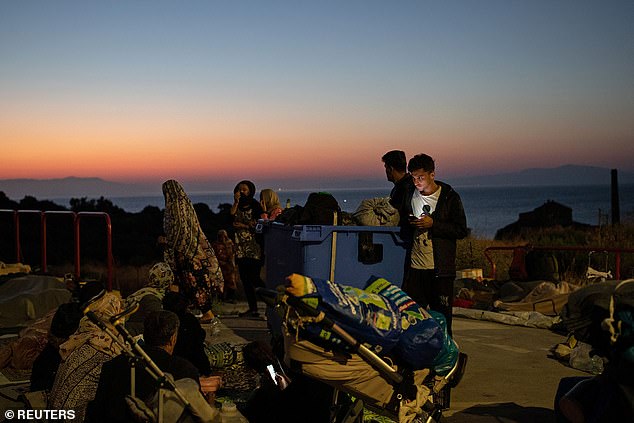 Refugees find shelter near the Lesbos coast early this morning, with thousands of people left homeless and hungry by the fire

The Netherlands offered to take in 100 of the migrants, half of them minors.

European Commission vice-president Margaritis Schinas, who visited Lesbos on Thursday, said they had organised the transfer of 400 unaccompanied minors to the mainland with a view to their relocation in Europe.

‘And in the next few hours, there will be ships financed by the European Union to provide shelter to those vulnerable, more-in-need,’ he said.

Since becoming one of the main gateways into Europe for migrants and asylum seekers in 2015, Greece has built dozens of detention centres around the country.

But with other European nations accepting only a small trickle of refugees, thousands remain trapped in the Greek camps in usually dismal health conditions.

‘This is Europe?’ asked Fatma, clutching her two-year-old son.

‘I’ve had enough, I just want my baby to grow up in peace,’ she said, breaking down in tears.

Death of Justice Ruth Bader Ginsburg: How will it shape the 2020 presidential election?

The World Economic Forum’s flagship Davos summit might not take place at all next year, according to Swiss media