China today accused the US of ‘sailing through the world like a bully’ amid an escalating row over the disputed South China Sea.

Hours after US Secretary of State Mike Pompeo branded Beijing’s claim over the waters as ‘completely unlawful’, China’s embassy in Washington hit back by accusing Donald Trump’s administration of ‘flexing muscles, stirring up tension and inciting confrontation’ with a ‘completely unjustified’ attack.

Foreign ministry spokesman Zhao Lijian called the US a ‘troublemaker and destroyer of regional peace and stability’ after two aircraft carriers, the USS Nimitz and USS Ronald Reagan, were recently dispatched to the region in a show of force.

Beijing claims most of the South China Sea based on the ‘nine-dash line’, a vague delineation which dates back to the 1940s. China has spent years building military bases on artificial islands in the area, which is home to valuable oil and gas deposits and is a vital commercial waterway.

The dispute is the latest flashpoint in the ever-growing feud between Washington and Beijing, who have sparred over Huawei, coronavirus and the security crackdown in Hong Kong.

Britain has also been at loggerheads with China – announcing today that Huawei would be stripped out of its 5G network – and reports say that the aircraft carrier HMS Queen Elizabeth is set to join military drills in the region next year.

This map shows China’s territorial claim in the South China Sea (in red), which the US yesterday described as ‘unlawful’. Marked in blue are US bases in Okinawa off Japan and in Darwin in Australia’s Northern Territory, and Sembawang wharf in Singapore where Britain’s Royal Navy maintains a small presence. Marked in red are three naval bases in South China belonging to the People’s Liberation Army The diagram on the right shows the carrier strike group of HMS Queen Elizabeth, which will reportedly be deployed to the region in 2021, and of the two US aircraft carriers which are currently in the region 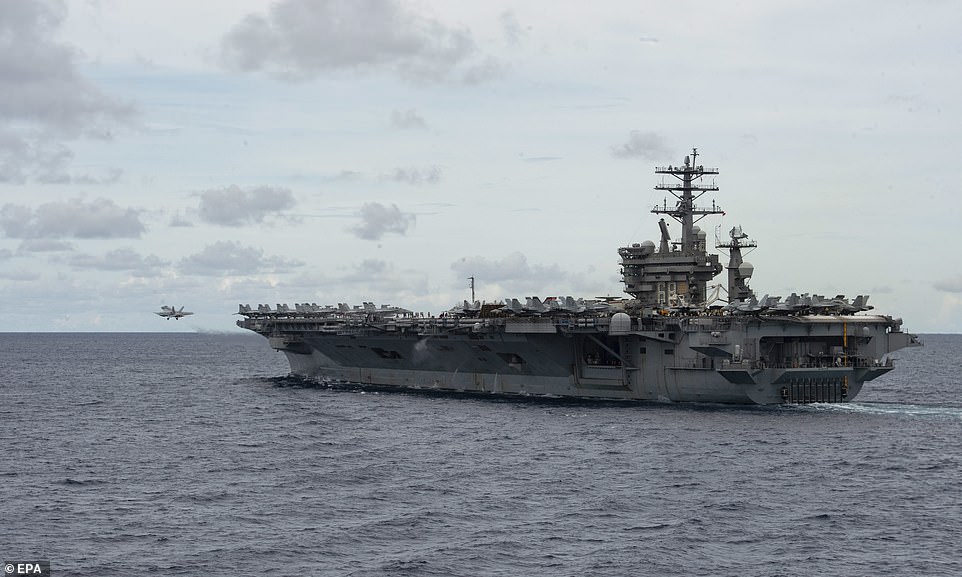 China today branded the US a ‘troublemaker’ and accused it of ‘stirring up tension’ over the disputed South China Sea (pictured, the US aircraft carrier USS Nimitz in the South China Sea earlier this month, with an FA-18E Super Hornet taking off from the flight deck) 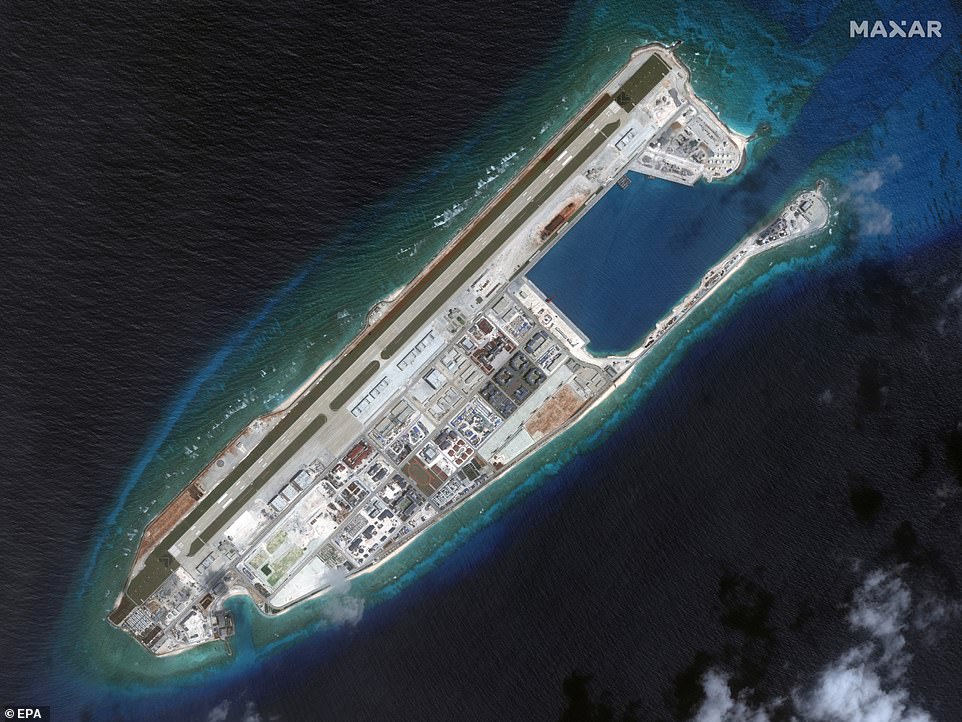 Beijing claims most of the South China Sea based on the so-called nine-dash line, a vague delineation which dates back to the 1940s, and has spent years building military bases on artificial islands in the area (pictured, Fiery Cross Reef where China has built missile shelters)

Pompeo issued his statement yesterday to mark the fourth anniversary of a tribunal decision that sided with the Philippines against the nine-dash line.

Citing the decision, Pompeo declared that China cannot make claims based on the Scarborough Reef or Spratly Islands, a vast uninhabited archipelago.

Previous US policy had been to insist that maritime disputes between China and its neighbours be resolved peacefully through UN-backed arbitration.

Savaging China’s policy as ‘might makes right’, Pompeo said the US would ‘stand with the international community in defence of freedom of the seas’.

‘We are making clear: Beijing’s claims to offshore resources across most of the South China Sea are completely unlawful, as is its campaign of bullying to control them,’ he said.

‘Beijing has offered no coherent legal basis for its nine-dash line claim in the South China Sea since formally announcing it in 2009.

‘The world will not allow Beijing to treat the South China Sea as its maritime empire. America stands with our Southeast Asian allies and partners in protecting their sovereign rights to offshore resources, consistent with their rights and obligations under international law. ‘

The US recently sent two aircraft carriers – the USS Ronald Reagan and USS Nimitz – into the South China Sea for the first time since 2014.

The Pentagon said the deployment was ‘bringing a flexibility and combat lethality unmatched anywhere in the world’ and would ‘increase our warfighting readiness’. 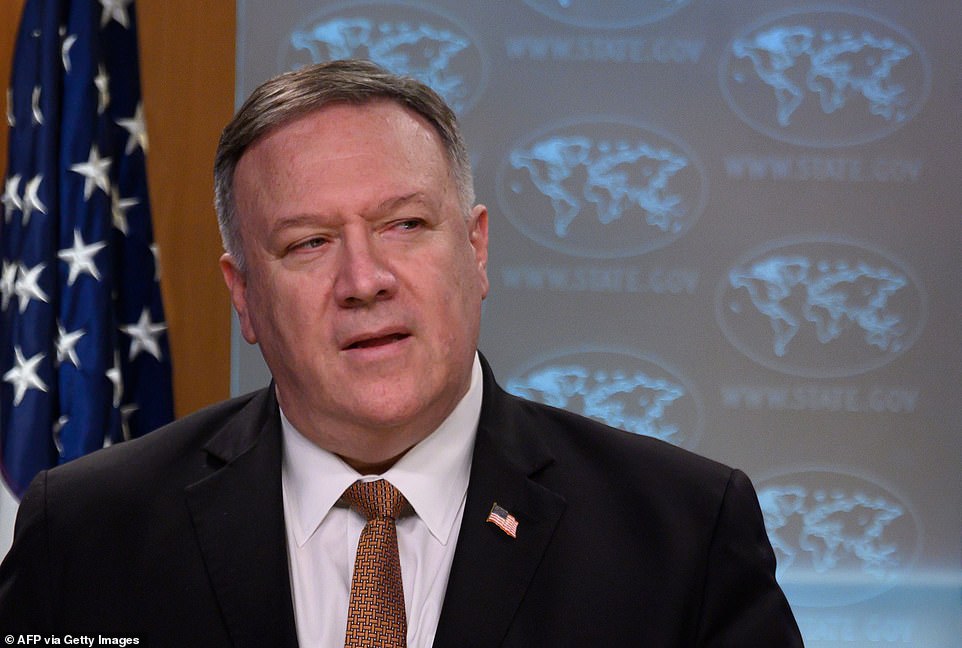 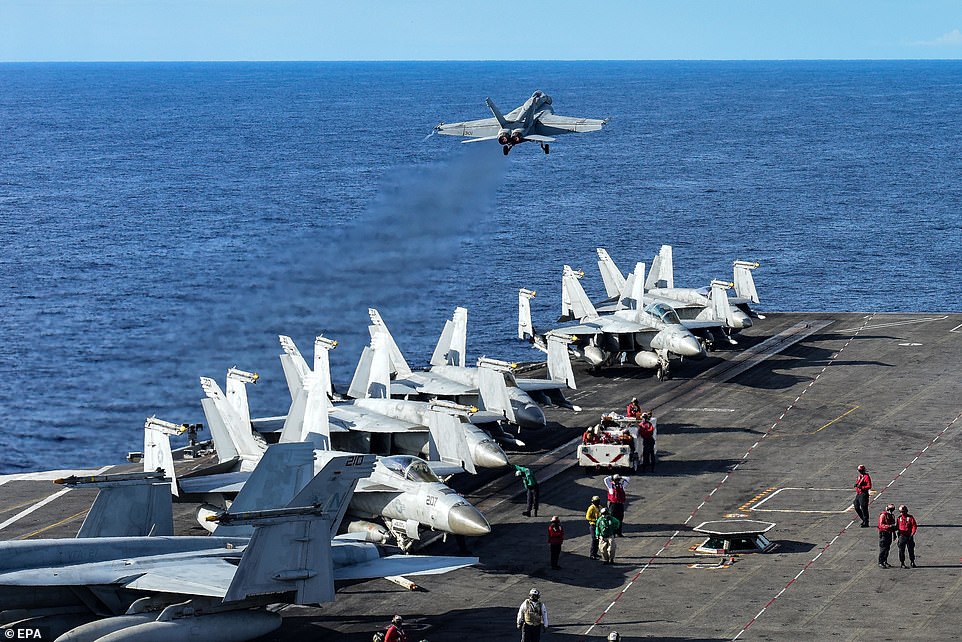 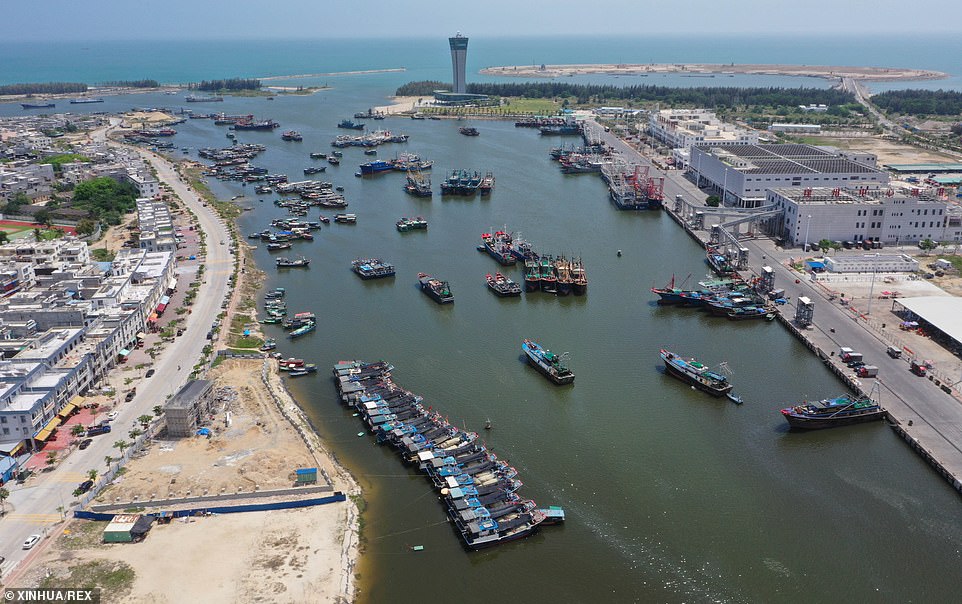 China claims the man-made islands are mainly for civilian purposes and to boost safety for fishing and maritime trade (pictured, a fishing port in south China)

In a strongly-worded rebuttal today, a Chinese embassy spokesman said Pompeo’s statement ‘exaggerates the situation in the region and attempts to sow discord’.

‘The accusation is completely unjustified. The Chinese side is firmly opposed to it,’ the embassy said.

‘The United States is not a country directly involved in the disputes. However, it has kept interfering in the issue.

‘Under the pretext of preserving stability, it is flexing muscles, stirring up tension and inciting confrontation in the region.

‘Under the pretext of upholding freedom of navigation and overflight, it is invading other countries’ territory at will and sailing through the world like a bully.

‘We advise the US side to earnestly honor its commitment of not taking sides on the issue of territorial sovereignty, respect regional countries’ efforts for a peaceful and stable South China Sea and stop its attempts to disrupt and sabotage regional peace and stability.’

In a further rebuttal today, government spokeswoman Hua Chunying claimed that it was the US, not China, that believes in ‘might makes right’.

‘The US,tens of thousands of miles away from the South China Sea sent advanced military airplanes to the region to flex its military muscles, which caused instability in the South China Sea. China, as an independent sovereign state,has the right to refuse bullying and injustice.’

The US and others have long accused Beijing of militarising the region and altering geography to bolster its sweeping claims across the South China Sea.

In 2017, Chinese state media said it had installed rocket launchers on Fiery Cross Reef in the Spratly Islands to ward off Vietnamese military combat divers.

China says the man-made islands in the Spratlys, which are equipped with airstrips, are for defensive purposes and to boost safety for fishing and maritime trade.

Fiery Cross Reef is administered by China but also claimed by the Philippines, Vietnam and Taiwan.

The 2016 decision which the US cited yesterday was made by a tribunal under the UN Convention on the Law of the Sea, which Pompeo called legally binding.

The United States, however, is one of the few countries that is not part of the convention.

‘The U.S. didn’t used to comment on the sovereignty issue in the South China Sea, because it itself is not the claimant,’ Zhu said.

‘But this time it has made itself into a judge or arbiter. It will bring new instability and tension.’ 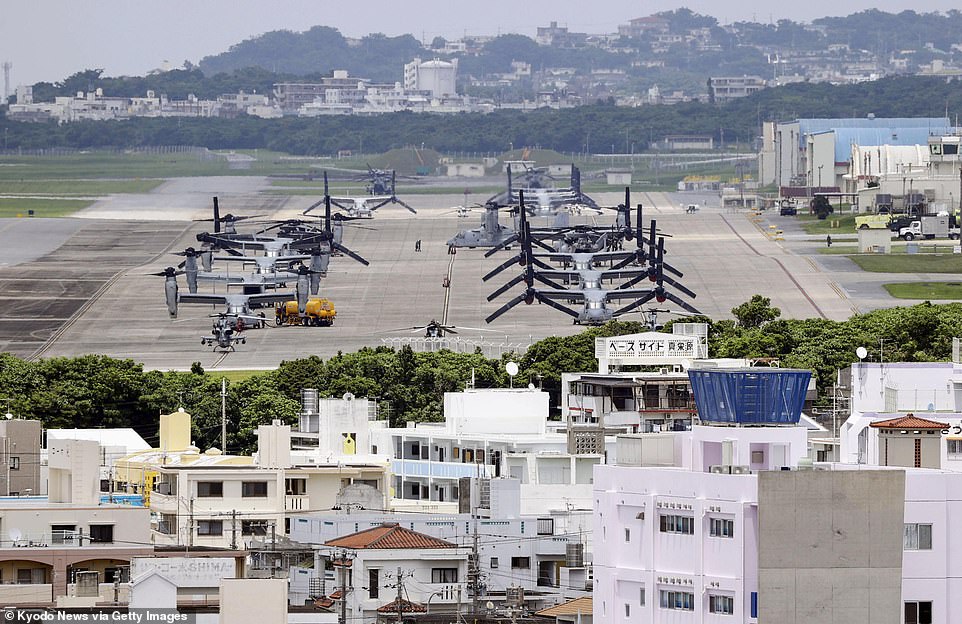 Reports say the US, Britain and Japan are set to take part in military drills in the Far East amid growing fears about China (pictured, a US Marine Corps Air Station in southern Japan)

A report adopted by prime minister Shinzo Abe’s cabinet said China has ‘relentlessly’ pushed to ‘change the status quo’ in the Asian seas, including sending 3,000-ton vessels into waters around disputed Japan-controlled islands.

The East China Sea islands are called Senkaku in Japanese, but Beijing also claims the islands and calls them the Diaoyu.

The annual report also accused China of spreading propaganda and misinformation about the spread of the coronavirus.

Chu Yin, a professor at the University of International Relations, dismissed the latest statement as a campaign move that does not deserve serious attention.

‘I personally believe that Trump doesn’t have the ability to introduce a medium to long-term strategy.’ he said.

‘If the two governments want to engage in strategic dialogue, we will have to wait until the completion of the US election.’

Tension has been ramping up in recent months with Washington pressuring its allies to turn their backs on Chinese tech giant Huawei.

The UK announced a major U-turn today by ordering Huawei purged from its 5G network by 2027, with no new purchases from 2021.

In January, UK ministers had announced that Huawei could play a limited role in the network, despite fears that Beijing could use its technology for espionage.

Huawei has always maintained that it would never assist in this, but critics say it could be ordered to  co-operate by the ruling Communist Party. 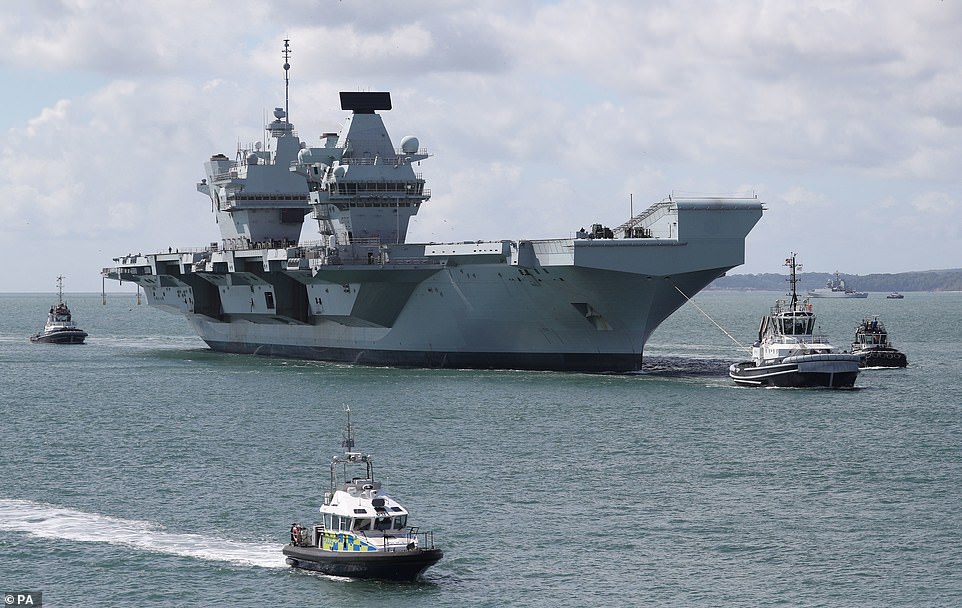 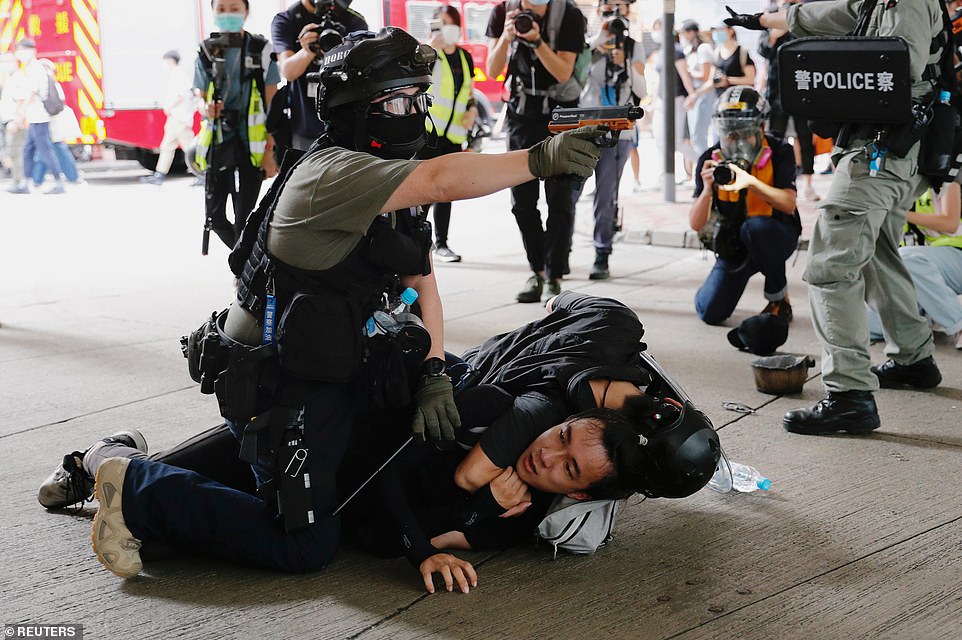 China has also clashed with the West over its security crackdown in Hong Kong (pictured, a protester is detained by a police officer in the city earlier this month)

It is also expected to announce a so-called ‘rip out’ date by which all the existing Huawei equipment must be removed.

Meanwhile, it has been reported that the first of the Royal Navy’s new aircraft carriers could be deployed to the Far East to counter growing Chinese assertiveness.

The Times reported plans were being drawn up for HMS Queen Elizabeth to take part in exercises in the region with the US and Japan, on its maiden grand voyage next year.

A Ministry of Defence spokesman said: ‘No decision has been made on HMS Queen Elizabeth’s deployment.’

Britain and America have also clashed with China over Hong Kong, where Beijing has imposed a sweeping new national security law in the wake of last year’s protests.

Critics say it strangles the freedoms that Hong Kong was guaranteed when it was handed over from British rule in 1997, but China denies this.

The UK last month announced that up to three million people with British National (Overseas) status linked to Hong Kong could be given residency in Britain.

China angrily rejected that move, warning that ‘we firmly oppose this and reserve the right to take corresponding measures’.

Trump and his administration have also been fiercely critical of China over coronavirus, while UK ministers have said that China faces a ‘reckoning’ over its handling of the pandemic which started in Wuhan late last year.

UK Defence Secretary Ben Wallace said in May that China has questions to answer about how the disease was allowed to spiral out of control, amid claims that China covered up the outbreak in its earliest days.

Britain was among the countries to back Australia’s calls for a WHO investigation into the pandemic. China has responded to Australia’s pressure with a series of retaliatory measures.

China’s state-run Global Times stoked further tension in May by saying the UK’s response to Covid-19 was ‘flippant and ill-prepared’ and saying the UK needed a ‘miracle’ to escape the ‘mess’ it was in.