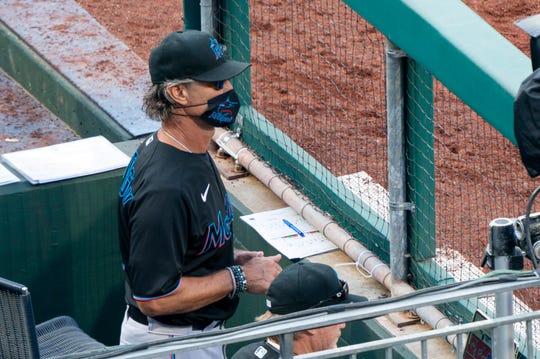 Miami Marlins manager Don Mattingly looks out from the dugout during the eighth inning against the Philadelphia Phillies. (Photo: Chris Szagola, AP)

It seemed inevitable that once team sports started playing games again during the COVID-19 pandemic, disruption would follow. On Monday, the inevitable hit.

Major League Baseball didn’t even get a full week of games played before having to scrap two scheduled for Monday — Yankees at Phillies and Orioles at Marlins. Philadelphia was the crossroads: The Marlins just finished a series there, and the Yankees were arriving from Washington.

The ripple effect was immediate. 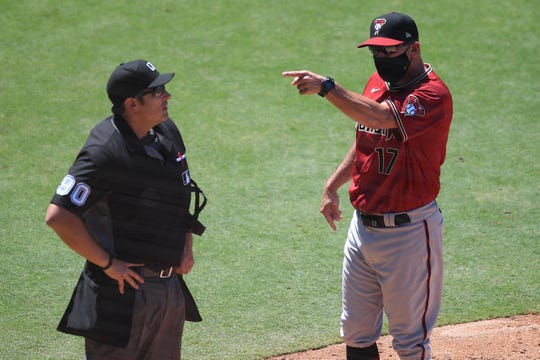 “I’m aware of the fact that there are two games that are postponed for testing and tracing,” Diamondbacks manager Torey Lovullo said Monday morning before Arizona took the field to complete a season-opening series in San Diego. “I mean, I’m concerned in general. I’m concerned today like I was last week. This virus is very real and we have to respect what it can do in this particular situation that I’m aware of. And we have to operate that way.

“The other thing that I’m continuing to do is hammer down on what we need to do inside of our own space to stay healthy and avoid the virus. That’s where we’re at right now. to be totally transparent, last night we got our testing results. We had zero positives. I’m proud of our guys for believing in what the message is and understanding that this is a very serious situation. I want to consider what we did, we had a successful weekend. That’s how we have to look at it.”

As baseball figures out what happens next, NFL teams are posed to start welcoming veteran players to their facilities this week. There are two tracks for this process, starting with official sign-off on the team’s Infectious Disease Emergency Response (IDER) plan by the NFL Players Association. As of Monday, 20 teams’ plans were reviewed and approved; the Cardinals are among the other 12 teams whose plans have been submitted but are still under review.

As ProFootballTalk noted on Monday, “There have been no indications of any serious problems the union has with any teams’ plans, but if a problem were to arise, it could potentially be a stumbling block between the league and the union toward opening that team’s training camp.” It is expected the Cardinals’ plan will also be approved.

The second track is allowing players into team buildings, but until the IDER is approved, NFL teams cannot have more than 20 people in a single group anywhere within the facility. The Cardinals are still scheduled to begin allowing veteran players to report on Tuesday, but only after virus testing, the specifics of which seem to be changing in real time.

According to Judy Battista of NFL Network, players now have to pass three tests before they are allowed to enter a team’s facility. Previously, players needed to pass a pair of tests, 72 hours apart, before they were cleared to begin. Now, they have to pass on the first, second, and fourth day to get in.

If all goes well for the Cardinals, physical exams, virtual meetings and more daily testing starts on Aug. 1. Following that comes eight days of strength/conditioning and walk-throughs between Aug. 3-11, followed by Phase 2 practices (helmets but no pads) four times between Aug. 12-16. Remember, the NFL preseason schedule was canceled last week.

Phoenix Brophy Prep became the first school to announce it had a COVID-19 positive case among its players during June’s football summer conditioning training. On Monday, the school announced it will remain in Phase 1 conditioning until at least Sept. 8 for safety and health reasons. This could jeopardize Brophy’s participation should the fall season be played on a relatively normal timeline.

Also on Monday, the AIA sent a survey to member schools regarding reopening plans, to help the association decide how to proceed. The surveys are due back to the AIA on Friday, and will be reviewed by the AIA’s Crisis Management Committee and at a special meeting of the Executive Board next week.

At Scottsdale Saguaro’s workout on Monday, senior defensive end Quintin Somerville, a Michigan State, commit, said, “We’re going into this thing with the idea that the season might be canceled, but it hasn’t stopped anything. We’re going hard trying to get better. Even if we don’t have a season, we’re preparing for college.”

Added Saguaro coach Jason Mohns: “We know our season is depending on these (positive test) numbers coming down. We just encourage (the players) to stay at home and stay safe. We hope that we can make a better impact to these numbers.

“We’re preparing ourselves as if our first game is Sept. 12. Whatever it looks like between now and then, it’s out of our hands.”

Players and staff from the 24 teams participating in the expanded Stanley Cup playoffs traveled to the Canadian hub cities of Toronto and Edmonton on Sunday. They’re now in a quarantined bubble.

In Florida, where the Marlins were supposed to play their home opener on Monday, both the NBA and WNBA are actively playing scrimmages and actual games within their respective “bubble” sites in Orlando and Bradenton.

Upon learning of the two MLB games being canceled after her team’s practice on Monday, Mercury coach Sandy Brondello said that she remains comfortable with the WNBA protocol and safety measures.

“I think this is safest place for us to be,” she said. “We’re getting tested every day. We’re in an environment where it’s just all of us. People are wearing masks. You never know. It’s a crazy virus. Hopefully we can control it. The WNBA and the medical people have done a really good job putting us in a safe environment.”

Watching MLB games it’s clear how challenging is has been for players and staff to stay vigilant with all of the myriad protocols in place. Instincts from years of competition are hard to fight.

“You know, every once in a while I’ll put my hand out there and knuckle a guy and I’m like, what an idiot? Why did I do that?” Lovullo said. “So I can only imagine how excited the players are getting. It’s a reminder once again afterwards. … I’m not perfect at it, but I want to continue to grow and learn so I don’t make those same mistakes. And I remind players of the same situation as well.”

Mark Faller is sports editor of the Arizona Republic and azcentral.com. Reach him at mark.faller@arizonarepublic.com, and follow him on Twitter @falleraz.

Pneumonia vaccine may cut Alzheimer’s risk by up to 40%

A few things I think about sports this week | Opinion

Jason Derulo was convinced ‘Cats’ would ‘change the world’

Pneumonia vaccine may cut Alzheimer's risk by up to 40%

An Inspector Calls… A review of Yotel Clerkenwell, London

Google will use Android smartphones as earthquake detection devices